How Are Channel Letters Bent? 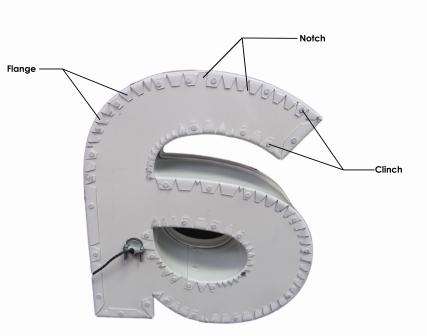 Bending is a critical step in the production of a high quality channel letter. Prior to discussing how bending is performed, it is important to understand the structure of a channel letter sign. Channel letters are manufactured from several components, and one of the primary parts is the return. The return is the side of a channel letter, and it typically ranges in depth from 3” to 8”, with 5” the most common return depth.

Channel Letter Bending Definitions That brings us to 3 key channel letter bending terms – notching, flanging and clinching. The photo below shows each.

A channel letter flange is a projecting rim used to attach the letter back to the return. A channel letter flange is notched (as opposed to being one continuous piece.) Notches are necessary to create enough space for a clean metal bend. These notches also give the operator room to work if the return requires further adjustment. The flange metal must have sufficient room to flex when it is bent, and that flexibility permits the letter return to be adjusted to a more accurate letter shape.

The flange is also called the “lip”. So, obviously a channel letter notch is simply the spaces cut throughout the flange. Last, a clinch is what is used to affix the letter back to the flange. A clinch is made by pressing the two metal pieces together using a piece of equipment called a “clincher”. A clincher has bottom punch and a top die that press forms the two metal pieces together, forming the clinch in the photo above. The equipment operator will typically place 3 to 4 clinches per linear foot. They will also place the clinches close to the letter mounting hole locations, so the letter back has sufficient tensile strength to handle the strain of the mounting load.

Direct Sign Wholesale Production Manager Chris Rogers points out “the newer benders also permit a file to be tweaked on the fly. That means the file can be adjusted while the bend is taking place. That flexibility gives the operator an opportunity to produce a correct bend even after they notice that the production file has a mistake.” However, it is also important to note that a bent return produced by automated equipment will usually still require some minor additional hand bending adjustments. This is needed to ensure the return precisely matches the artwork specifications. So automated letter bending does not completely eliminate hand work. However, automated bending is not appropriate for all companies. Hand bending is another potential bending technique.

Hand Channel Letter Bending When the term “hand bending” is used for letter bending, it does not mean that the entire process is performed with hand tools. Hand bending often utilizes a piece of equipment called a letter brake. A brake is basically a clamp that holds the return in place while the operator bends the return by hand. This is a labor intensive process, and the amount of time needed to bend a return by hand will vary depending on the experience level of the operator. Hand bending is also utilized typically for .040 aluminum gauge return material. If a channel letter requires a .063 return gauge (such as a large or a reverse letter), a letter brake may not be suitable to bend it (unless it is non-tempered.) Hand bending also introduces the element of human error.

An automated bender will bend a return exactly as the file is outlined – if the production file is accurate, the bend will be accurate. In contrast, an operator making a hand bend may make a mistake as the return is bent, and necessitate either starting a new return or making a substantial adjustment to the current one. Another issue with hand bending is that of speed. Even an experienced bender will take far longer to produce a completed return than an automated bender (one estimate is 3 – 4 minutes vs. 30 minutes.) Obviously, hand bending can only work for a sign shop that produces minimal letter volume.

The operator must also cut the notches by hand, which takes more time. So the correct bending technique for a given situation depends on both current and projected future letter production volume. The ancillary decision is whether producing in house (whether bending by hand or by automated equipment) is right for your company. Even when it is done well, it requires time, labor, equipment and raw materials. Outsourcing letter production eliminates the internal expense associated with letter manufacturing.